Ketchikan
Ketchikan is known as Alaska’s “First City” because it’s the first major community travelers come to as they journey north. Located on an island, Ketchikan began life as an Indian fishing camp. The name Ketchikan comes from a Tlingit phrase that means “eagle with spread-out wings,” a reference to a waterfall near town.
In the early 1900s, when gold was Alaska’s claim to fame, fishing and timber industries were established in Ketchikan. The growth of these industries helped make this Inside Passage port Alaska’s fourth-largest city.
Visitors to Ketchikan will be intrigued by its rich Native heritage, which includes the world’s oldest collection of totem poles at Totem Heritage Center. The Haida, Tlingit and Tsimshian are all a part of the city’s colorful history. Ketchikan, with its abundance of salmon, is also a sportfishing paradise. Sightseers will be impressed with both the scenic town and its surroundings, especially Misty Fjords National Monument.

Juneau
In 1880, it was slow going for Joe Juneau and Richard Harris as they searched for gold with the help of Native guides. After climbing mountains, forging streams and facing countless difficulties, they found nuggets “as large as beans.”
From their discovery came three of the largest gold mines in the world. By the end of World War II, more than $150 million in gold had been mined. Eventually the mines closed, but the town Joe Juneau founded became the capital of Alaska and the business of gold was replaced by the business of government.
Some 30,000 people live in Juneau. Its total area makes it one of the biggest towns, in size, in the world. Only Kiruna, Sweden, and Sitka, Alaska, exceed Juneau’s 3,248 square miles.
Today Juneau is famous not only for gold and government but also for its breathtakingly beautiful glaciers and stunning views of both water and mountains.

Skagway
Skagway was the gateway to the gold fields for the thousands who flocked to Alaska and the Yukon with the hope of striking it rich. Skagway may have boasted the shortest route to the Klondike, but it wasn’t the easiest.
Over 100 years ago, the White Pass route through the Coast Mountains and the shorter but steeper Chilkoot Trail were used by countless stampeders. Many a would-be miner perished on the treacherous Chilkoot Trail.
The gold rush was a boon and by 1898, Skagway was Alaska’s largest town with a population of about 20,000. Hotels, saloons, dance halls and gambling houses prospered. But when the gold yield dwindled in 1900, so did the population as miners quickly shifted to new finds in Nome.
Today, Skagway has less than 1,000 residents. It still retains the flavor of the gold rush era. 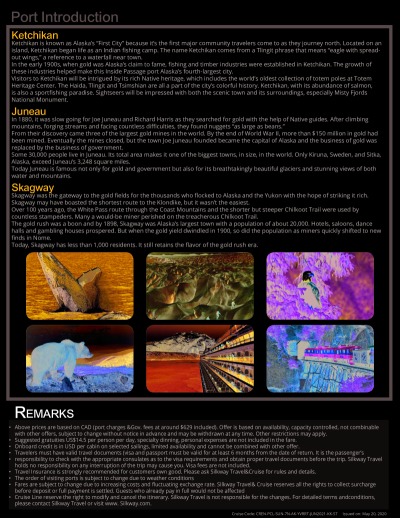