Vancouver
Located on a lush peninsula in southwestern British Columbia surrounded by water on 3 sides and situated alongside a picture-perfect, snow-capped mountain range, this world-class city has a stunning skyline. A bustling metropolis to be certain, Vancouver retains its strong connection to the great outdoors. From more than 200 parks to the century-old Capilano Suspension Bridge spanning the Capilano River, Vancouver seamlessly blends the rural with the urban to create a cityscape unlike any other. Thanks to its natural beauty, recreational activities and thriving artistic and gastronomic scenes, Vancouver is a leading destination for visitors from around the globe.

Dawes Glacier
At over 600 feet tall and a mile wide, Dawes Glacier is a gigantic remnant of an even larger ice block that fashioned Endicott Arm fjord centuries ago. Comprised of 2 enormous glaciers and united by a medial moraine at its center, it’s easy to overlook the fact that the glacier hides 250 feet of ice below the surface of the water. Stand in awe at this mighty beauty and be on the lookout for the process known as calving, where giant chunks of ice break off and spill into the seawater below without warning.
Offering a glimpse into the past, the Dawes Glacier is a reminder of a time long gone, when ice the size of continents swallowed up whole countries during the Ice Ages of the past.

Skagway
A plethora of magnificent, albeit quaint, landmark buildings line the main thoroughfare in town. Broadway Street illustrates what life was like during Skagway’s heyday—when opportunity and riches were as easy to find as the gold that brought treasure-seekers from near and far. While walking along this historic 7-block stretch, don’t be surprised if you bump into residents wearing late 19th-century attire from the time when the town came into prominence.

Juneau
Originally a fishing outpost for local Tlingit Native Americans, Juneau was founded in 1880 after 2 prospectors—Richard Harris and Joseph Juneau—discovered gold in the region, thanks to help by Chief Kowee of the Auk Tlingit Tribe. Shortly thereafter, the town, originally called Harrisburg, was struck with “gold fever” and began to flourish, followed by hard-rock mining, sawmilling, canning and an expanding fishing industry. Juneau became the capital of Alaska in 1906.
Today, Juneau remains a treasured tourist destination that includes not only a Tlingit Native American influence, but also a tradition steeped in Russian culture. Boasting timeless natural wonders, museums and the historic sites, Juneau continues to stir the imaginations of all who visit.

Ketchikan
Ketchikan’s humble beginnings started when a salmon saltery was established in 1883. In 1885, 160 acres of land were purchased from local Native Americans and—a year later—the first salmon cannery was built at the mouth of the Ketchikan Creek.
By 1900, the fishing trade was flourishing and the town was officially founded. Ketchikan, already successful from industrial fishing, soon branched out and became a valuable mining supply center due to the discovery of gold and copper in the region, followed by a flourishing logging industry that continued throughout the 20th century. 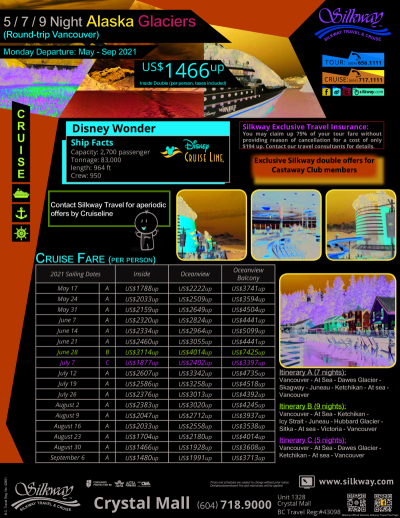 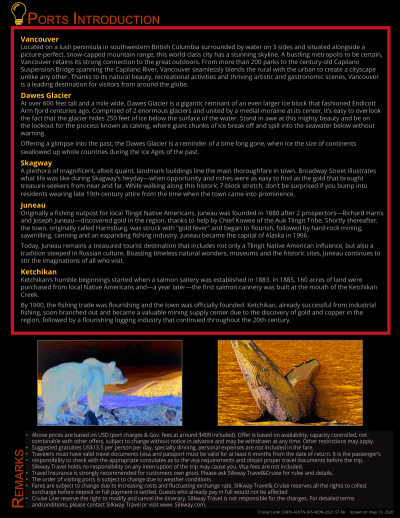